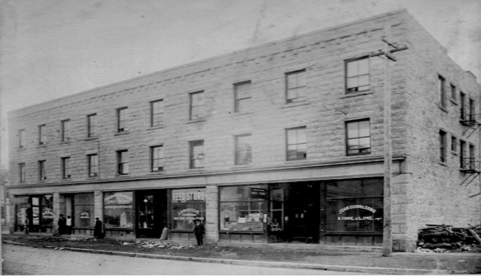 I have realized over the years that I have inherited something that must be in my genes. Growing up one of the people I looked up to was my grandfather. He was born in 1910 in Radisson Saskatchewan. His parents were Ukrainian immigrants. They owned the general and feed store in town. I learned recently that, at the start of world war 1 in 1914, my great grandmother prepared care packages – socks, underwear and other necessities – for the boys who were not already taken care of when they were off to war. When my grandfather and his sister had birthdays they did not receive birthday gifts from their guests. They were taught to give gifts – which is what they did. Guests to their birthday parties were given gifts. This was the beginning of my grandfather’s leadership training and development. 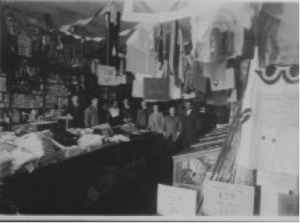 After the depression my great grandparents tried to start a paint store but were unsuccessful. Over time my grandfather ended up in Vancouver BC. He started his own business – Acme Electric. This was long before Wyle E. Coyote had anything to do with the Acme company. My grandfather was married by now and had his home based electrical contractor business. By home based I don’t mean just an office. His entire basement was a creators dream. Every type of wire, screw, nut, bolt, electric tool, breaker panel – whatever you needed he had it in his basement. He even bought case lots of toilet paper for the family – before Costco existed. 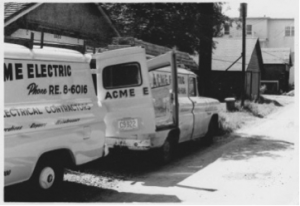 My grandmother answered the phone from Monday to Friday between 8am and 4:30pm. A call would come in and she would then page my grandfather. He would get the “beep” the get to a pay phone and call home to get the message. Being completely transparent – over the years my grandmother was slightly resentful that she had to stay home and answer the phone. The daily routine consisted of the boys showing up in the morning, getting their supplies for the day and getting in their trucks. At lunch they would all come back to the house to have lunch. Sometimes they would bring their own and sometimes my grandmother would make it for them. They would gather around the TV and watch Merv Griffin. After lunch it was back to work.

When I was a kid I would look forward to going to work with my grandfather. I would sit on a wire spool in between the seats in the front of the truck. Seatbelts were not mandatory at that time. We would go from job site to job site. He would check on his guys, check on the work, we would go for coffee then to another job site. We would then go for coffee again. I thought that being an electrician meant going for coffee and meeting people. I realized that it is way more than that. It is rumored that my grandfather was one of the first people to use fluorescent lights in Canada which he installed in to the Army and Navy store downtown. He worked in many of the historic buildings in Vancouver. He also answered calls at 3am for someone whose fuse blew on their stove. When I was 16 he offered me the business, as he wanted to retire. I said no. Yes…it was a big mistake….in hindsight. He gave the business, GAVE the business, to one of his guys who had been with him for well over 30 years. In fact, most of his crew was with him for many years.

Through his years when he would go to a funeral at the local cemetery, he would walk around and write down the names on the headstones that were dirty and in disrepair. He would pay someone to have them cleaned. He told no one.

The leadership lessons I learned from my grandfather are:

Mark Simmons CPCC, ACC – works with business owners, managers, the movers and the shakers – the people that want to make a difference in their worlds through leadership development, training, personal development and creativity. Want to build foundation, set direction and reshape your business vision?

« Stay focused on your goals – my 4 tips for you!
“Deep In The Belly” A look at depression from the inside »
Shares
Share This